Here at GrandPad we want to help Seniors live life to the fullest. These are just a few of our favorite videos that show Seniors doing exactly that.

The Power of Music

Grandmas and Grandpas light up and groove along to this surprise concert by ThePianoGuys. Studies on music and its relation to the elderly have demonstrated remarkable psychological benefits and shown to improve positive overall health.

Man In Nursing Home Reacts To Hearing Music From His Era

Meet Henry, who suffered from dementia for a decade and barely said a word to anyone - until Music & Memory set up an iPod program at his nursing home.

After six decades, Margaret Dunning still breezes down the road in her creamy 740 Packard roadster.

FCB Brasil and the CNA language school network are launching the Speaking Exchange project, which connects CNA students in Brazil with Americans living in retirement homes.

Groovin' grandpa throws down cane, dances up a storm

Alzheimer's sufferer Ted McDermott, 80, sings with his son Simon in their own viral version of carpool karaoke.

'ICU Grandpa' Cuddles Premature Babies Whose Parents Can't Be With Them

David Deutchman cuddles premature babies in the hospital when their parents can't be there. These families may have other children at home or live far from Children's Healthcare in Atlanta. Deutchman never knows which babies he'll hold or what their issues are, but he knows he's there to help.

The couple with the longest marriage in America

Dale and Alice Rockey are each 99 years old. They met as kids just after the turn of the last century, in the small town of Hemingford, Nebraska. As Lee Cowan reports, the group Worldwide Marriage Encounter crowned the Rockeys the Longest Married Couple of 2015, having been husband and wife for 81 years.

The Gift-Wrap & The Jewel. By Wanda B. Goines

This lovely and eloquent woman of 92 recites a beautiful poem she wrote about strength in aging. Her poem truly embodies GrandPad's ideals and our motto: Live Grand.

When Carla Wilson, 67, was diagnosed with terminal cancer she was understandably upset. But then her youngest daughter, Robyn, came up with an idea to help make her mother -- and herself -- feel better. Steve Hartman reports on "Operation Choose Joy." 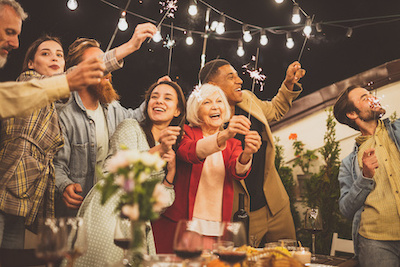 Thank you! Your submission has been received!
Oops! Something went wrong while submitting the form. Please contact us if error persists, we may already have your email on file.